Two important roads run through the district – the national road No 11 and the national road No 12 (linking the Western Europe and Ukraine). Moreover, the provincial roads No 442 and 443 link the north and the south of Poland. These road connections influence significantly the economic development of our district.

The Pleszew District's chief asset is quaint, unpolluted areas and numerous monuments.
Gołuchów, which is famous all over Poland for its the Działyńskis' Castle, is the place to visit in the district. It is a branch of the National Museum in Poznań and houses the Forest Culture Center, the Museum of Forestry and a bison and fallow deer enclosure. In summer the inhabitants and tourists bask eagerly by Gołuchów Reservoir. The leisure center offers a wide range of facilities, e.g., a bathing beach, campsites, a water sports equipment rental and cabins. One the attractions is an enormous erratic boulder called "St. Jadwiga's Stone" which is in the nearby Jedlec forest. A similar erratic boulder is in the vicinity of Ruda near Lutynia in the Dobrzyca Commune.

Currently Dobrzyca is aspiring to become a tourist center with its recently restored Palace and Park Complex Museum which is full of freemasonic symbolism and Romantic elements of garden architecture. Other fascinating monuments may be seen in Chocz, Pleszew and Taczanów. Tourists may admire well-preserved estate complexes, old rural buildings, wooden churches and "billy goats", i.e. wooden widmills. Believers make pilgrimages to well-known sanctuaries of Our Lady in Tursko, Lutynia and Żegocin.

The values of the Pleszew District – its history, culture and captivating monuments – can be acquainted with the assistance of the developing tourist accommodation and tourist farms located in picturesque all year round villages. Not only do tourist farms offer peace and quiet and clean air but they also enable tourists to take part in a wide range of activities, e.g. horseback-riding courses, bonfires, festivities, angling, picking blueberries and mushrooms, for example, boletus, birch boletus and foxy milk caps.
The districts landscape is enriched by the Prosna River, which flows through five communes of the district, with a canoeing route and Gołuchów Reservoir with an area of 51 ha. Moraine scenery near Lutynia and Ruda is another place of interest all year round and the authorities are planning to build another reservoir - "Lutynia" Reservoir.

Tourists have a chance to attend concerts held in castles in Gołuchów and Dobrzyca. The local authorities organize interesting sports and folklore events: the Mikołajczyk Race held in Dobrzyca in June, the Pleszew District Harvest Festival held in September and Midsummer Night parties in Gizałki and Gołuchów held in June. There are also performances by folk bands and choirs and a branch of PTTK (Polish Tourist Country-Lovers' Association) in Pleszew organizes different hikes ("Welcome Spring", "Winter in the Gołuchów Park") and cycling trips ("The Monuments of Remembrance" and "The Narrow-gauge Railway Trip").

The residents of the Pleszew District are famous for the passion for breaking records in many fields. In 2002 they broke the Guinness record in baking the biggest loaf of bread in the world and the following year they prepared the largest tomato salad weighing over 2.200 lbs. Pleszew is also the hometown of a renown Guinness record holder, Zbigniew Różanek, who has constructed miniatures of a telephone, a microscope and a bicycle. 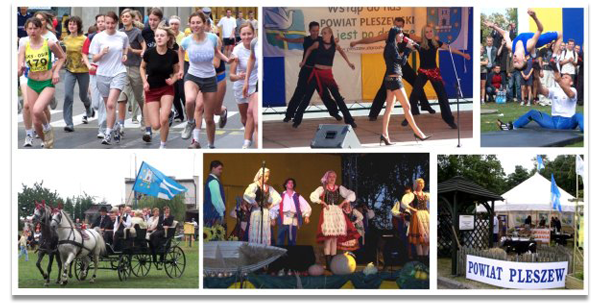 The residents of the Pleszew District are not only kind and hospitable, but they are also remarkable for their thrift characteristic of the inhabitants of the Wielkopolska Province.

Approximately four thousand business entities run a business in the Pleszew District. The most important enterprises are SPOMASZ Pleszew (machine for food industry), FAMOT SA (machine tool factory) and ADROS in Dobrzyca (a modern poultry abattoir). The most important industries are production of boilers – there are over one hundred producers of central heating boilers and cooperating companies, horticulture – the leading role plays The Pleszew District Horticulture Association "The Pleszew Tomato". Craftsman traditions are cherished by the Guild of Different Crafts. Pleszew is widely known for its saddlery and saddles and harnesses produced here are exported to Europe, the USA and Australia. There are a few firms which manufacture chaises and carriages. Carpenter's workshops are thriving and they specialize in producing stairs, doors and windows. "Kowalew-Dobrzyca" District Dairy is famous for its dairy products, i.e. cheese, yoghurt, kefir and butter. We may observe dynamic development of butcher's and meat processing industry. Delicious cakes baked in Pleszew are widely acclaimed and local confectioners bake cakes strictly in accordance with the traditional recipes. The Vogts' confectionary, the oldest one in the district, boasts a 170-year-old tradition.